Skip to content
The name “Disaster” came from the experience I had when I first tried to create these raw cookies a few years ago. I was actually attempting to make an chocolate chip oatmeal cookie, but created a tasty mess instead. I was trying so hard to create my own raw chocolate chips, as I had seen in numerous raw recipe books – but it just wasn’t working for me. However, the method in which I used worked for this recipe. I basically used raw cacao paste, agave, and pink Himalayan salt. I melted the cacao first, and blended in the other ingredients. Then I made little dots of chocolate on a flat tray that I placed in the freezer for about an hour. The drops looked great, until I added them to the cookie dough. The cookie dough was still warm from processing it in the food processor that the chips immediately melted. So even though I didn’t have “chips” per say in my cookie, I did have a delicious chocolate candy drizzle mixed in. It worked! Truly, the cookies tasted fantastic! Try it for yourself. Here’s the recipe:
Ingredients:
½ cup ground oats
1 cup almond meal
1 T lucuma powder
1 T mesquite powder
1 T vanilla powder
1 cup ground raw walnuts
1 T coconut butter
3 T raw almond butter
1 T organic vanilla extract (non-alcohol)
1 tsp pink Himalayan salt
½ tsp ground cinnamon
½ to 2/3 cup packed dates
¼ cup agave
1/3 cup ground oats (fold in with chips)
1/3 cup almond meal (fold in with chips)
¼ cup raw chocolate chips (as described in my post)
Preparation:
Combine all ingredients except last three in a food processor. Blend until a dough mixture forms. Remove from processor and add to a bowl. Add raw chocolate chips and remaining ground oats and almond meal. Combine well. More than likely the chips will melt right into the dough mixture as it is combined. If not, slightly warm the dough in the food processor again. Using a cookie scoop or large spoon, form balls and press into flat cookie rounds or leave as cookie balls. Refrigerate or freeze for storage. 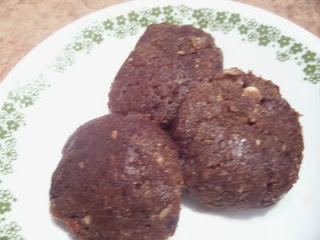